Embassy of Texas in London 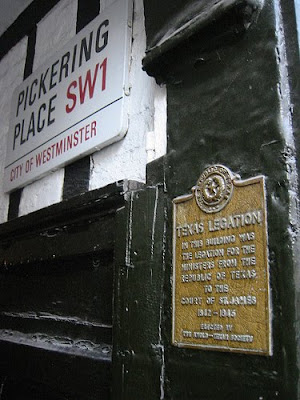 In London, the original building that housed the embassy of the Republic of Texas still stands. Opposite the gates to St. James’s Palace, the Texas Legation’s Embassy of the Republic of Texas was located in an alley next to legendary wine merchant Berry Bros & Rudd (at no. 3), which was also the creator and manufacturer of Cutty Sark Scotch. Just a happy coincidence, perhaps? Berry Bros. & Rudd were landlords to the Texas Legation in the 1840s, a fact not forgotten by modern day Texans. About 25 years ago, during the Texas sesquicentennial, 26 Texans dressed in buckskin showed up at the wine shop to settle the Republic’s outstanding debt of $160, repaid on the spot in Republic of Texas bills.

During its time as a Republic, Texas maintained three Legations (a diplomatic entity similar to an embassy): in Paris, Washington DC and London. In London a plaque marks the location at No. 4 St. James Street, which was the diplomatic address of Dr. Ashbel Smith, appointed ambassador to London by Sam Houston. Smith was a medical doctor who served as the Texas Republic’s last Secretary of State. At the time No. 4 St. James Street was operating as a whorehouse and notorious gambling den, so Berry Bros. & Rudd suddenly found themselves with a more prestigious tenant.

The location was certainly convenient, since ambassadors were then presented to the Court of St. James across the street at St. James Palace. When the plaque was installed in the alleyway in 1963 by the Anglo-Texan Society, former Texas governor Price Daniel and Tony Berry (a Berry Bros. & Rudd descendant), were in attendance. Novelist Graham Geene was also member of the Anglo-Texan Society, which was founded in the 1950s.

Through a narrow arched opening next to the wine shop, one enters the dark alley lined with black painted wood paneling and half timbering. Halfway down the alley on the right, under a sconce, is the door to the rooms once used by the Texas Legation. 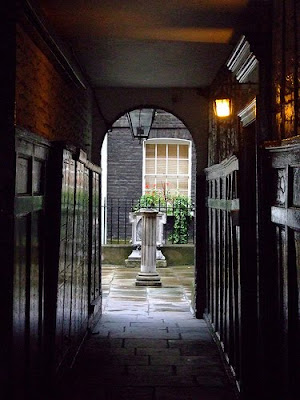 The plaque, mounted at the St. James Street entrance to the passageway, reads:

“Texas Legation. In this building was the legation for the ministers from the Republic of Texas to the Court of St James 1842-1845. Erected by the Anglo-Texan Society.”

Ambassadors to Britain are still officially ambassadors to the Court of St. James’s, which includes the monarch and a group of diplomats.

At the far end of the alley lies Pickering Place, a paved square with a sundial in the center, London’s smallest public square and once a notorious venue for duels and bear-baiting*. Pickering Place, shown in the painting below, has two distinctions: being the last place in London where a duel was fought and the place where Napoleon III plotted his return to France (he was in exile in England between 1838 and 1848, during the time the Texas Legation was in residence, 1842-1845). 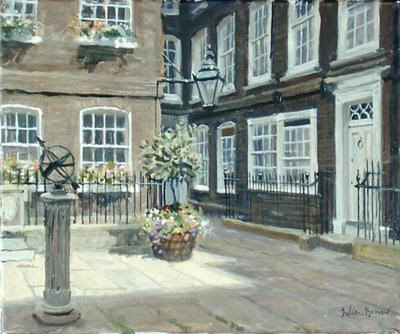 Texas did not become a state and join the union until 1845. A restaurant near Trafalgar Square called “Texas Embassy” pays homage to this bit of history. Interestingly, its location at 1 Cockspur Street was the former office of the White Star Line, owners of the ill-fated RMS Titanic.

*Bear-bating was a spectator blood sport in which a bear was chained to a post and set upon by dogs. Henry VIII and Elizabeth I were avid fans. 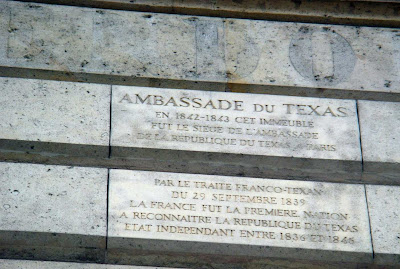 No. 1, Place Vendôme (Paris), built in 1723 for Pierre Perrin, secretary to King Louis XIV, became the Embassy of the Republic of Texas in 1842. France was the first nation to recognize the independence of Texas from Mexico before it achieved statehood in 1845. However, the French ambassador to (Austin) Texas complained that he was nearly killed by an arrow during a Comanche Indian raid which whizzed by his head as he left his Texas residence one afternoon. In 1858, no. 1, Place Vendôme became a tourist hotel, which was recently purchased and renovated as the Hôtel de Vendôme. The engraved stone marker, still visible today, reads:

WITH THE FRANCO-TEXAN TREATY
OF SEPTEMBER 29TH, 1839
FRANCE BECAME THE FIRST NATION
TO RECOGNIZE THE REPUBLIC OF TEXAS
AS AN INDEPENDENT STATE BETWEEN 1836 AND 1845.